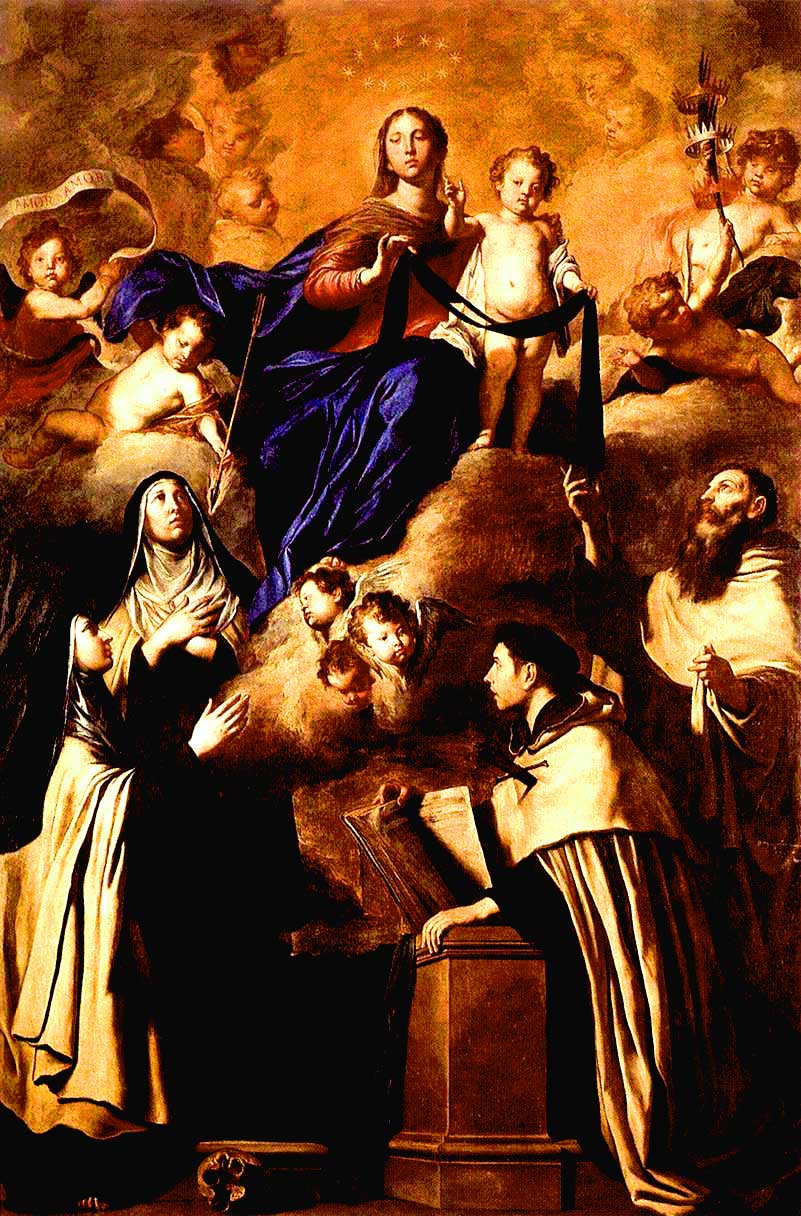 In Allegiance to Jesus Christ

We, as Lay Carmelites, are called to the Family of Carmel to be involved deeply in the mission of the Church. We strive to contribute to the sanctification and transformation of the secular world. We do this by sharing or participating in the charism of the Carmelite Order. In short, the Charism of Carmel is: prayer (personal and liturgical); community (a love of those with whom we live and work); and apostolic work (solidarity with God's people everywhere).

The call to Carmel is the call to seek God's will in the ordinary circumstances of everyday life. We find in Mary, the Mother of Jesus, and in the Profit Elijah, the models for this way of Gospel living.

Mary reminds us to listen to God's Word and to cooperate with His will for the salvation of all people. In Elijah, we are shown an example of prophetic action. We are shown a life spent in the service of God---service which finds it's source in a profound experience of God through prayer.

An Invitation to You

Any Catholic at least 18 years of age may become a Lay Carmelite. After sharing in the Community and becoming familiar with the spirit of Carmel, and if there is evidence of your vocation, your process of discernment continues with it's goal, a deeper relationship within the Family of Carmel. If you seek personal growth, spiritual formation, an opportunity to share with others in your spiritual journey and would like to belong to the world-wide Carmelite family please contact us.

Every Day Living for the Lay Carmelite

All the members of our Lay Carmelite Communities are expected to attend formal monthly meetings. These meetings provide opportunities for all Chapter members to develop solid Carmelite family ties. In addition to a short business meeting, there is a set period for community prayer, Lectio Divina and sharing, fellowship and on-going formation with book study related to Carmelite spirituality

The Liturgy of the Hours is the Prayer of the Church. Along with frequent attendance at Mass, the Liturgy of the Hours is the heart of a Lay Carmelite's prayer life. Individual and communal readings of Scripture using Lectio Divina has also been rediscovered as a way of growing in relationship with Jesus Christ. This traditional way of praying opens us to what God wants to say to us. A Lay Carmelite desires to practice living in God's presence in their ordinary day.

Being a Lay Carmelite is a great way to live our lives, and while life has it's challenges, our Carmelite family is with us all the way.

A statue of Our Lady of Mount Carmel from Portugal that dates to the 1940s is on display, along with other Marian imagery. ( Joseph Pronechen photo)

Honoring Our Lady of Mount Carmel

Peaceful prayer and Carmelite relics are offered at national shrine.

The mid-Hudson River Valley region in New York is home to the National Shrine of Our Lady of Mount Carmel.

The Carmelites in charge have made sure visitors feel the peace, serenity and spirituality of this holy place.

From the chapel to the tranquil 60 acres dotted with outdoor shrines, visitors feel like guests of Our Lady, the Holy Family and the many Carmelite saints venerated in various ways here.

It is a prayerful place to visit on Our Lady of Mount Carmel?s July 16 feast day, thanks to the Province of St. Elias, the only religious order to have originated in the Holy Land that is dedicated to Our Lady and known as Mary?s order since its beginnings centuries ago. This particular province has its seeds in Ireland. Four priests sailed to Manhattan to serve the poor Irish at a new parish, arriving in March 1889. By that December, the new Our Lady of the Scapular of Mount Carmel Church was dedicated. Thus began the mission that became the North American Province of St. Elias. In 1941, they established the original National Shrine of Our Lady of Mount Carmel at the parish where parishioners made millions of scapulars to send to military personnel during World War II.

In 1917, the Carmelites bought the Middletown acreage where the shrine now stands for a seminary. In 1991, with Cardinal John O'Connor?s approval, they transferred the shrine from New York City to Middletown.

This national shrine (OurLadyofMtCarmelShrine.com) has a remarkable connection to this year?s 100th anniversary of Fatima. The sanctuary?s Our Lady of Mount Carmel statue from Portugal, enthroned this last Feb. 4, has a history connected to Servant of God Lucia dos Santos.

During the last Fatima apparition on Oct. 13, 1917, Our Lady appeared to the three children as Our Lady of the Rosary, Our Lady of Sorrows and Our Lady of Mount Carmel, holding the Brown Scapular in her hands.

In 1947, two Carmelite priests from the Province of St. Elias spoke with Sister Lucia to hear her explain the scapular?s importance in the Fatima apparitions.

Receiving help from a Portuguese Carmelite, they commissioned sculptor Jose Ferreira Thedim ? who sculpted the original Our Lady of Fatima statue in 1920, plus more statues under Lucia?s guidance that became today?s International Traveling Pilgrim Virgin statues ? to carve a statue of Our Lady of Mount Carmel according to Sister Lucia?s interpretation.

The bishop of Fatima blessed the completed statue on Sept. 13, 1949. When it arrived in New York for the Carmelite parish in Manhattan, Cardinal Francis Spellman blessed it, fittingly, on July 16, 1950, the feast of Our Lady of Mount Carmel.

Eventually, the parish was combined with St. Stephen?s. The Carmelites left in 2007, and when the parish closed in 2014, the Carmelites asked that the statue be returned to the St. Elias Province. Thus Our Lady?s statue arrived in Middletown in July 2015.

The statue of Our Lady appears with a cloud. Mary is depicted holding the Child Jesus in her left hand, offering visitors a scapular with her right hand. The look conveyed in the statue is motherly, showing love and care. Originally, the scapular the statue held was woven by Sister Lucia.

Below the statue, a golden relief shows Mary giving the scapular to St. Simon Stock. Inscribed in gold across the top of the baldacchino is Tu Soror Nostra Es from Proverbs 7:4 ? ?You Are Our Sister.?

For this special Fatima anniversary year, the sanctuary?s St. Joseph Shrine was transformed into a shrine for Our Lady of Fatima. With the tabernacle in view and a kneeler at the ready, it?s a perfect place to pray.

Another statue of Our Lady of Mount Carmel graces the sanctuary high on the wall above the central tabernacle. The altars of green Connemara marble from Ireland reflect the roots of the Province of St. Elias, as do some of the stained-glass windows and the St. Patrick Shrine in the rear of the nave.

Many Carmelites are honored in colorful windows, including doctors of the Church Sts. Teresa of Ávila and John of the Cross, as well as Blessed Titus Brandsma, a martyr at the Nazi Dachau concentration camp, shown giving Communion to his fellow prisoners.

Pilgrims and visitors can stop and pray before depictions of their favorite saints and also learn about lesser-known holy lives.

And there is a detailed window depicting Our Lady appearing to St. Simon Stock in 1251 in Aylesford, England, to give him the Brown Scapular.

In the nave, the ?cloud of witnesses? continues. The St. Patrick Shrine has relics not only of Ireland?s patron, but also of Ste. Brigid, Oliver Plunkett and John the Evangelist, all in an engraved reliquary topped with a magnificent crucifix.

Two reliquary shrines are also located along the rear nave. Among the many relics are some of several Carmelites, including John of the Cross, Albert of Trapani, the first Carmelite to be canonized, and Mary Magdalen de?Pazzi.

Another shrine contains a piece of the True Cross. The jawbone of St. Simon Stock is also present for veneration. Carol Bezak, the shrine director, told the Register, ?Youngsters think that it?s ?cool? ? they love it.?

Other reliquaries allow pilgrims to venerate Sts. John Vianney, Gertrude, Martin de Porres, Catherine of Siena and Malachy. As Bezak said, ?To pray with the relics reinforces their faith.?

The Infant of Prague Shrine brings to light how the Carmelites made this devotion part of their apostolate and, in the early 1700s, started spreading the word.

Overall, the most popular saint?s shrine here is the one dedicated to Carmelite St. Thérèse of Lisieux. A large, gleaming golden reliquary supported by two kneeling golden angels and topped with a cross contains a piece of her uncorrupted flesh, as well as a piece of bone, locks of hair and a cloth touched to her body. A nearly life-size image of the Little Flower holding a crucifix and roses stands next to the reliquary.

There is so much more to discover at this shrine, such as unique religious art, including a rescued and restored statue of Our Lady of Mount Carmel and a painted image of St. Thérèse that was displayed in the Vatican Pavilion at the World?s Fair in New York in 1964.

Visitors should be sure to take the prayerful outside ?Cloisters Walk,? where pilgrims make the Carmelite Stations of the Cross, so called because images of Carmelite saints appear woven into the traditional Station images, or pray before the tall statue of the Good Shepherd. From there, they can walk to the picturesque twin lakes, with an arching bridge, where many people take their wedding and first Communion photos.

A picnic area and outdoor shrines dedicated to such saints as St. Joseph, as well as an outdoor Our Lady of Mount Carmel shrine and a Mary garden, continue to draw visitors. Coming this summer will be a 10-foot tall image of Our Lady of La Vang. The spiritual tranquility is so great that the closest major interstate, less than 10 minutes away, feels much further away.

This shrine?s treasures are a blessing to pilgrims and visitors in so many ways in this peaceful and prayerful shrine honoring Our Lady of Mount Carmel.

NATIONAL SHRINE OF OUR LADY